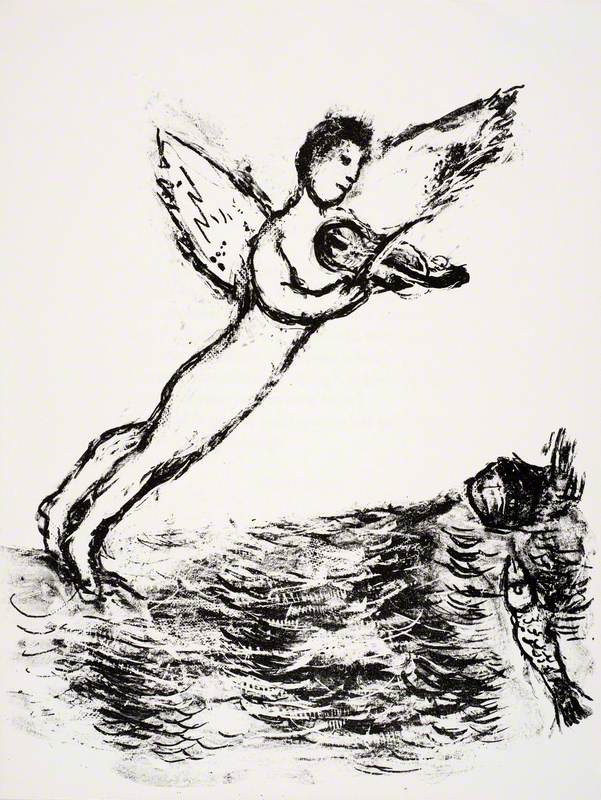 Ariel Posed above the Sea, Playing the Violin 1975

(b Vitebsk [now Vitsyebsk, Belarus], 7 July 1887; d Saint-Paul-de-Vence, 28 Mar. 1985). Russian-born painter and designer, active mainly in France. In 1910–14 he lived in Paris, where he was a member of an avant-garde circle including Apollinaire, Delaunay, Léger, Modigliani, and Soutine. After going to Berlin in 1914 for his first one-man show (at the Sturm Gallery) he visited Russia and had to remain because of the outbreak of war. Following the Revolution in 1917 he was appointed Fine Arts Commissar for his home province of Vitebsk, where he founded and directed an art academy. Malevich was among the other teachers there, and after disagreements with him Chagall left in 1920 and moved to Moscow, where he made designs for the newly founded Jewish Theatre.

Read more
He returned to Paris in 1923 at the invitation of Ambroise Vollard, who commissioned much work from him, including illustrations for Gogol's Dead Souls, La Fontaine's Fables, and the Bible (these were not published until 1948, 1952, and 1956 respectively). In 1937 he became a French citizen, but he was stripped of his new nationality under the anti-Jewish laws passed after the German invasion. He escaped to Spain in 1941 and from there moved to the USA, where he lived for the next seven years. In 1948 he returned to Paris, and from 1949 he lived on the Riviera, near Nice, working to the end of his very long life—the last survivor of the generation of artists who had revolutionized painting in the years leading up to the First World War.Chagall was prolific as a painter and also as a book illustrator and designer of stained glass (in which he did some of his most impressive late work) and of sets and costumes for the theatre and ballet. His work was dominated by two rich sources of imagery: memories of the Jewish life and folklore of his early years in Russia; and the Bible (he was born into a deeply religious family). He derived some of his spatial dislocations and prismatic colour effects from Cubism and Orphism, but he created a highly distinctive style, remarkable for its sense of fairy-tale fantasy. Because the scenes he depicted made no rational sense, André Breton claimed him as one of the precursors of Surrealism (and it was during the heyday of Surrealism—the 1930s—that his reputation became international), but Chagall himself stated in his autobiography Ma vie (1931) that however fantastic and imaginative his pictures appeared, he painted only direct reminiscences of his early years. Rather than exploring the unconscious mind, he was interested in great timeless themes, such as birth, love, marriage, and death, which he interpreted in his own warm and whimsical way. There is a museum devoted to Chagall's religious art in Nice. The work there does not always show him at his best, for he could be sentimental and overblown, but his finest paintings have won him an enduring reputation as one of the greatest masters of the École de Paris.