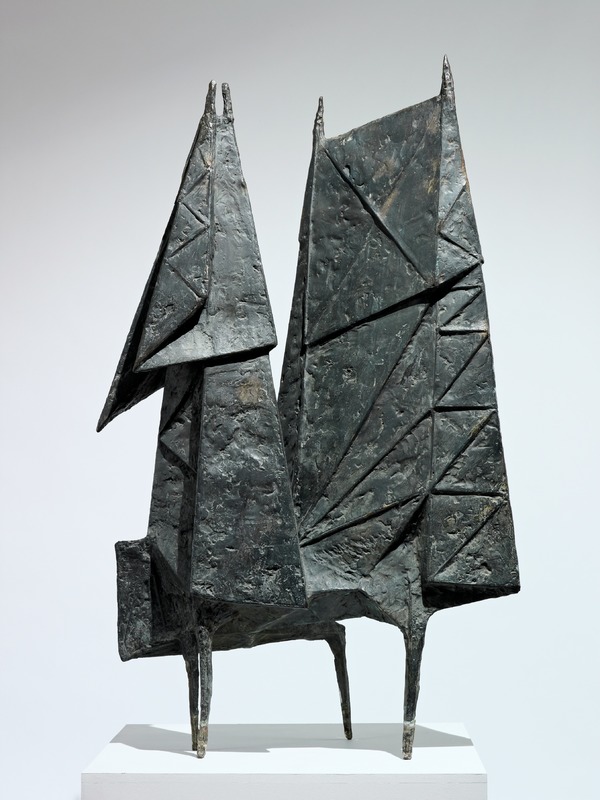 Sculptor in metal, born in London. He is noted for his mobiles and for abstract shapes, dancing children and waiting and watching figures. After education at Merchant Taylors’ School, although Chadwick wanted to become a sculptor, his family persuaded him to enter an architect’s office, and he stayed an architectural draughtsman until World War II, when he became a Fleet Air Arm pilot. Working with the architect Rodney Thomas after the war Chadwick began experimenting with mobiles, partly inspired by the work of Alexander Calder. First showed at LG in 1950, in that year having initial one-man show at Gimpel Fils. Gained a national prize in The Unknown Political Prisoner competition in 1953; won International Sculpture Prize at Venice Biennale, 1956; and first prize at Concorso Internazionale del Bronzetto, in Padua, 1959.

Read more
Showed regularly with Marlborough Gallery since 1961. Exhibited extensively around the world, being represented in many major collections, including Tate Gallery and Museum of Modern Art, New York. Retrospective at Yorkshire Sculpture Park, 1991–2; there was a solo show in 2001 at Beaux Arts, which, with Tate Britain, gave him a retrospective in 2003, and another exhibition in that year, Coming from the Dark, at Gallery Pangolin, Chalford. Lived at Stroud, Gloucestershire.

Sculptor, born in Barnes, London. From 1933-39 he worked as an architectural draughtsman in London, then spent some time as a farm labourer before volunteering for the Fleet Air Arm and gaining a commission, 1941-44. After the war he produced textile, furniture and architectural designs, and his first metal mobiles created from aluminium and balsa wood were exhibited at a Building Trades Exhibition, London in 1947. He turned to sculpture and his early figures were based on humanoid and animal forms. Chadwick was also at this time a member of the British Art Medal Society and undertook occasional commissions in this area.

Chadwick held his first exhibition at Gimpel Fils, London in 1950. In 1951 he was commissioned to make three works for the Festival of Britain exhibition on the South Bank. In 1953 he was one of the twelve semi-finalists for the Unknown Political Prisoner International Sculpture Competition in which he was awarded an Honourable Mention and a prize. By 1956 his reputation as a sculptor was confirmed internationally by his winning the International Prize for Sculpture at the XXVIII Venice Biennale. By 1957 he had held his first USA exhibition at the Saidenberg Gallery, New York.

In 1959 he won First Prize at the Concorso Internazionale del Bronzetto in Padua, Italy. More prizes and tributes followed as his career developed, including his being awarded the CBE in 1964. He has shown at Marlborough Fine Art, New York and his work is represented in most major collections world-wide. In 2003 a major retrospective exhibition of his work was held at London’s Tate Gallery and since then his work has been exhibited in a group exhibition at the Grosvenor Gallery in 2007.Chadwick created a permanent exhibition of his work at his Gloucestershire home, Lypiatt Park, close to Pangolin Editions, the foundry which casts most of his work, from monumental bronzes to miniatures in silver. His estate is handled by and exhibited at Beaux Arts Bath and Beaux Arts London and can be seen at the Jerwood Sculpture Park and in museums and galleries throughout the UK.

Lynn Chadwick: Sculptures since 1954: A catalogue to accompany an exhibition held at Cheltenham Art Gallery and Museums, Gloucestershire, 1993. ISBN 0905157184.

With thanks to artbiogs.co.uk.