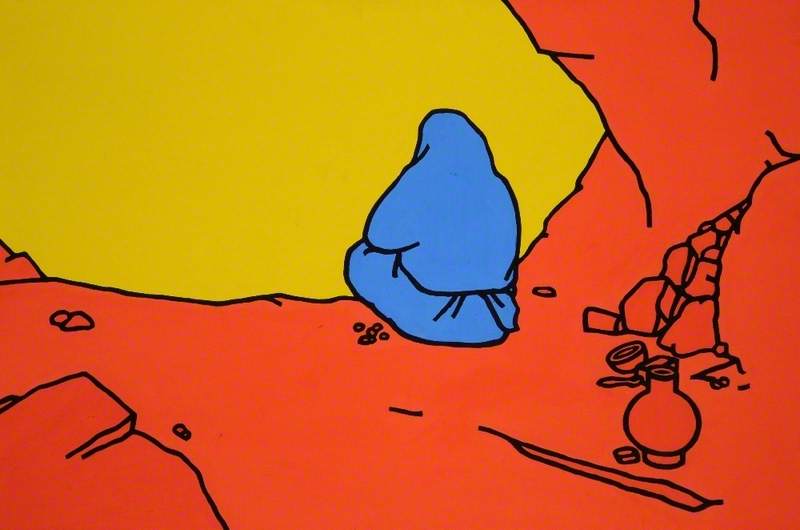 British painter and printmaker, born in London, where he studied at Chelsea School of Art, 1956–9, and the *Royal College of Art, 1959–63. In 1963 he began teaching at Chelsea School of Art and in 1965 he had his first one-man exhibition at the Robert Fraser Gallery, London. His work has been linked with *Pop art, although when introducing his work in 1964 he invoked, not the currently fashionable mass media theorists, but the Catholic poet and mystic Gerard Manley Hopkins.

Read more
However, his work shared with artists such as Peter *Blake and David *Hockney a sense that the imagery was ‘in quotation marks’, so undermining the division between abstract and figurative art. The flat colour and black outlines of his painting (in his early work the impersonal surface was achieved by the use of gloss paint on board) were sometimes compared to Roy *Lichtenstein, although the American painter's work was unknown to him when Caulfield first established his style. The principal sources of his work lay in *Cubism. He looked to *Léger and especially *Gris, to whom he paid tribute in an early imaginary portrait and more subtly in Santa Margherita Ligure (1964). In this work he draws on the way in which Gris combined interior and exterior within the same plane. Discussing his painting in the 1964 *New Generation catalogue, David Thompson argued that Caulfield was interested in ‘devalued’ motifs, the way in which a painting by Delacroix or a device from Cubism or early abstraction could become ‘vulgarized’. When these early pictures are seen in the light of Caulfield's painting over the subsequent 40 years this seems to be putting things in reverse. What Caulfield was actually doing was using a highly accessible and apparently simple pictorial language, not out of irony, but to achieve effects of the utmost refinement. Although on the surface his style changed comparatively little, the uses to which he put it were extraordinarily varied. Some commentators have detected in his later work a strong sense of melancholy and mortality communicated through the pristine surfaces. He took up *screenprinting in 1964 and the following year won a prize for graphics at the Paris *Biennale. Subsequently print was an important part of his output. He also made designs for the Royal Ballet. An exhibition was devoted to his work at the Tate Gallery, London, in 1981 and another at the Hayward Gallery in 1999, but he never achieved the international reputation many of his admirers believed that he deserved. Further Reading M Livingstone, obituary, The Independent (1 October 2005)