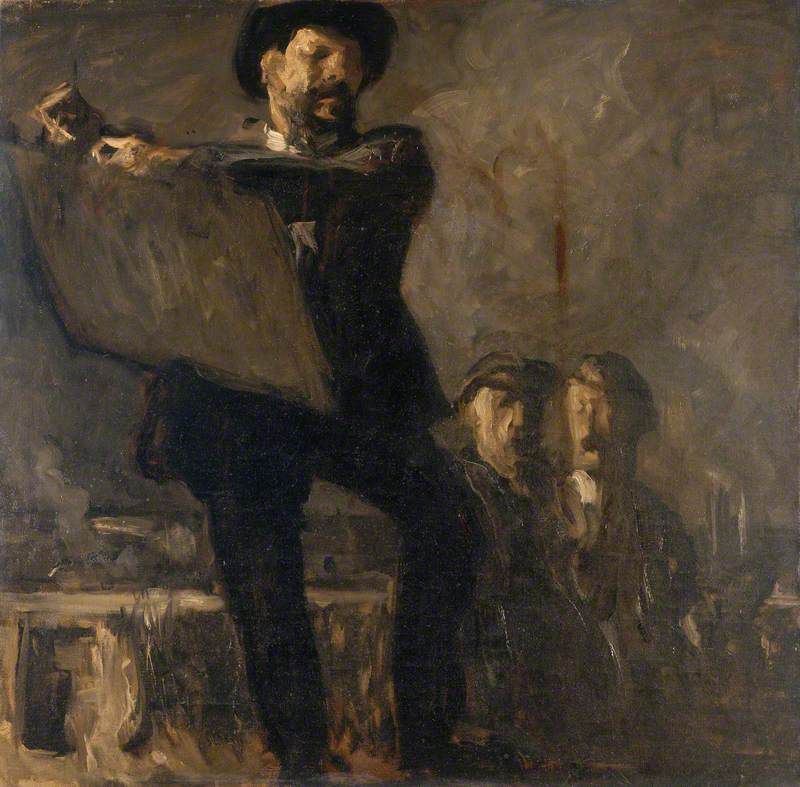 Self Portrait with Miners 1907

(b Bruges, 13 May 1867; d Ditchling, Sussex, 11 June 1956). British painter, printmaker, draughtsman, and designer, the son of a Welsh architect who specialized in church furnishings and who was working in Belgium at the time of the boy's birth. In 1882–4 Brangwyn served an apprenticeship with William Morris, and like his master he was active in a variety of fields. He was an Official War Artist in the First World War, for example, he was one of the finest draughtsmen of the day and a skilful etcher and lithographer, and he made designs for a great range of objects (furniture, textiles, ceramics, glassware, jewellery, and so on); however, he became best known for his murals. His most famous undertaking in this field was a series of large panels on the theme of the British empire, commissioned by the House of Lords.

Read more
They were begun in 1926 and rejected—amid great controversy—in 1930, being considered too flamboyant for their setting. Offers for the panels came from all over the world, and in 1934 they were installed in the Guildhall in Swansea. Brangwyn's work at its most characteristic was floridly coloured, crowded with detail and incident, and rather Rubensian, although it later became somewhat flatter, lighter, and more stylized. For much of his career he was one of the most famous artists in the world. He received many honours at home and abroad and was held in particularly high esteem in his birthplace Bruges, where a museum devoted to him was founded in 1936 (there is another large collection of his work in the Musée Municipale, Orange). His reputation crumbled after his death, his work tending to be dismissed as facile and sentimental, but there has recently been a revival of interest in him: a major exhibition was held in Leeds, Bruges, and Swansea in 2006 to mark the 50th anniversary of his death.