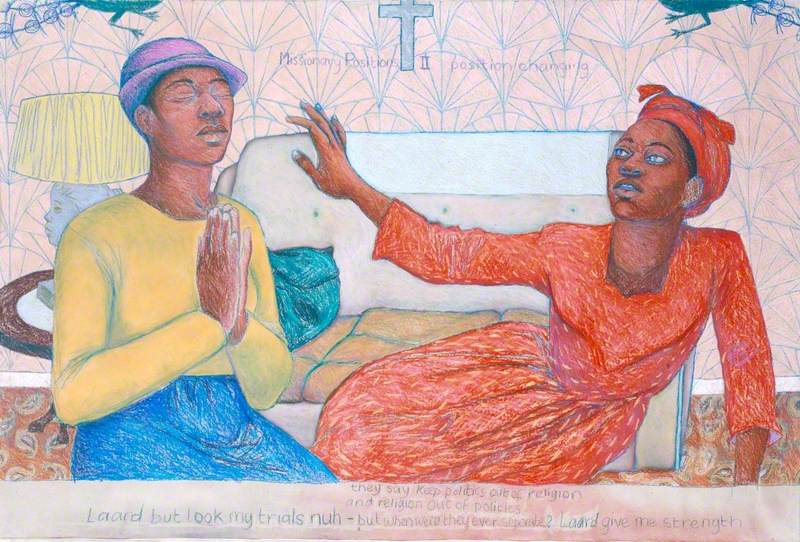 British painter, born in London to West Indian immigrant parents. She studied at East Ham College of Art and Technology, 1979–80, then at Stourbridge College of Art, near Birmingham, graduating in 1983. In 1982 she attended the first national conference of black artists, where she met the Tanzanian-born painter Lubaina Himid (1954– ), who has been a leading figure in encouraging and promoting the work of black women artists—in ‘making ourselves more visible by making positive images of black women’.

Read more
Boyce's paintings and mixed media images of contemporary black life have been widely exhibited and have won her a considerable reputation. In 1989 she was included in a large exhibition of work by Afro-Asian artists in Britain, entitled ‘The Other Story’, at the Hayward Gallery, London, and was praised by Brian *Sewell, who wrote that ‘Sonia Boyce matches perfectly the subtle delicacy of pastel to strident colour, sculptural form and robust imagery, so that her work is decorative and profound, sophisticated and primitive, beautiful and urgently political’. Since then Boyce has moved increasingly towards work with photography and installation. In 1995 she made an intervention in the ‘Cultures’ gallery in the Brighton Museum and Art Gallery in which cases were converted into translucent vitrines with thin coloured paper. By converting the museum display into ‘peep shows’, she emphasized the element of voyeurism in the museum's presentation of ‘other’ cultures.