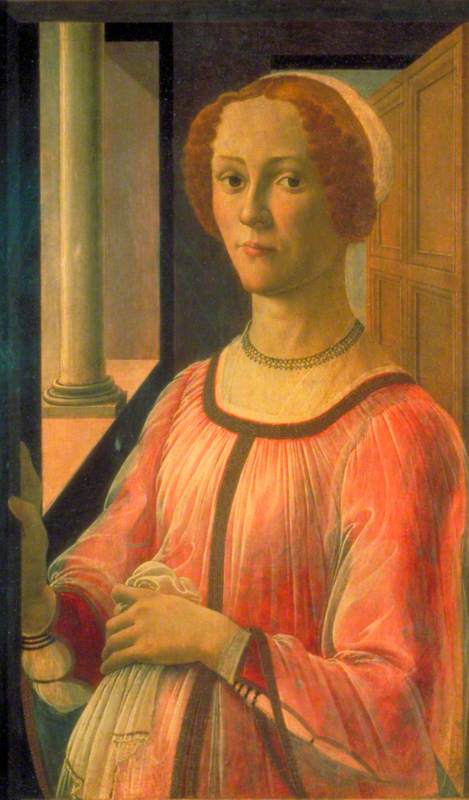 (Born Florence, c.1445; buried Florence, 17 May 1510). Florentine painter, neglected for centuries but now one of the best-loved artists of the Renaissance. The name ‘Botticelli’ (‘little barrel’) was originally given to an older brother, presumably because he was portly, but it was adopted as the family surname. According to Vasari, Sandro was first apprenticed to a goldsmith and then trained under Filippo Lippi. Lippi's sweetness and grace certainly had a strong influence on him, but Botticelli was more refined, particularly in his draughtsmanship, in which he achieved an extraordinary combination of delicacy and flowing vitality: Bernard Berenson described him as ‘the greatest artist of linear design that Europe has ever had’.

Read more
Almost all Botticelli's life was spent in Florence, his only significant journey from the city being in 1481–2, when he worked on the decoration of the Sistine Chapel in the Vatican, alongside Ghirlandaio, Perugino, and other artists. The fact that he was called to Rome for such a prestigious commission shows that he must have had a considerable reputation by this time, and during the 1480s he seems to have been the most sought-after painter in Florence. His clients included the civic authorities, major churches, and members of distinguished families, particularly the Medici, and in about 1485, when Ludovico Sforza, Duke of Milan, asked his agent in Florence for information about leading artists there, Botticelli was described as ‘A most excellent painter, both on panel and on wall. His works have a virile air and are done with the best judgement and perfect proportion.’ He ran a busy workshop (Filippino Lippi was his most important pupil) and some of his paintings (particularly those on the theme of the Virgin and Child) exist in several versions or copies, attesting to the vogue they enjoyed. In the 1490s, however, Botticelli's fortunes declined, and after Leonardo's return to the city in 1500 his linear style must have looked archaic. In his final years he had financial problems and Vasari describes him as ‘old and useless, unable to stand upright and moving about with the aid of crutches’. At his death he was a relic of a bygone age.

By the standards of his time, Botticelli's output was large and varied. The bulk of his work was devoted to religious subjects, but he also painted portraits and allegorical, literary, and mythological themes. In addition—and highly unusually—he made drawings as independent works. His most remarkable drawings are a series of illustrations for a deluxe manuscript edition of Dante's Divine Comedy (c.1490), commissioned by Lorenzo di Pierfrancesco de' Medici. The project was never finished and the 92 surviving drawings (which are in various states of completion) are now divided between the Kupferstichkabinett, Berlin, and the Vatican Library. It was perhaps for the same patron that Botticelli painted his two most celebrated pictures, Primavera (c.1480) and the Birth of Venus (c.1485), both now in the Uffizi, Florence. In Vasari's day they hung together in the Medici villa at Castello, near Florence, and they are mentioned by him in the same sentence, since when they have always been closely linked. However, they were not necessarily painted as a pair (Primavera is slightly bigger than the Birth of Venus and is painted on panel, whilst its companion is on canvas). Botticelli was the first painter since antiquity to treat such mythological themes on a large scale and with the seriousness usually reserved for religious subjects. Vasari described the subject of Primavera as ‘Venus as a symbol of spring [It., primavera] being adorned with flowers by the Graces’. Various other mythological figures are present, and a huge amount of scholarly effort has gone into trying to elucidate the symbolic meaning of the picture and of the Birth of Venus. While the debate about iconographical interpretation continues, the pictures are universally acknowledged as two of the most beautiful works of the Renaissance, and they are now so famous that they are virtually symbols of the age.

Like other artists (Fra Bartolommeo for example), Botticelli seems to have been disturbed by the turbulent political climate of Florence in the 1490s. Vasari says that he became a follower of the fiery preacher Savonarola, ‘which led him to abandon painting’. The second part of this statement is definitely incorrect and the evidence for the first part is inconclusive, but it is certainly true that some of Botticelli's later paintings are more obviously ‘serious’—solemn, intense, sometimes ecstatic—than his early works. The most telling example is the Mystic Nativity (1500, NG, London); it is the only work he signed or dated and it bears a cryptic inscription in Greek suggesting that he expected the second coming of Christ. It is remarkably personal in style, disregarding all the advances in naturalism that Florentine painters had made during the 15th century: he has even used the medieval device of making the Virgin and Child bigger in scale than the other figures. Botticelli's spirituality was one of the characteristics that appealed to the Victorians, who rediscovered him after a long period of obscurity. When Walter Pater published an essay on him in 1870 he described him as ‘a comparatively unknown artist’, but by the end of the century he had become something of a cult figure—a major influence on Art Nouveau and on the wan, elongated maidens of Burne-Jones and his followers.