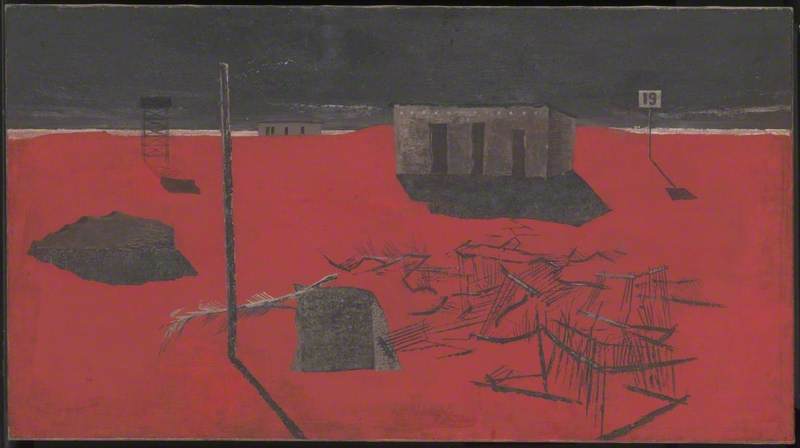 Travelled widely during World War II in the Army, after which he rejoined Shell for two years before joining the staff of Lilliput magazine until 1950. He drew for it and was its art editor. Began to exhibit widely, including the RA, Drian Gallery and Paris Salon. Boswell was a persuasive writer, publishing The Artist’s Dilemma in 1947. While working as editor of the house journal of J Sainsbury Ltd, the retail firm, he wrote its centenary history. The bitingly satirical cartoonist and printmaker, whose work has been compared to that of the German George Grosz, diversified in the 1950s and 1960s. In 1951 he finished a large mural for the Sea and Ships pavilion for the Festival of Britain; he designed the poster Let’s Go With Labour and the party’s entire publicity campaign for the 1964 general election; film posters included It Always Rains on Sunday and The Blue Lamp, for Ealing Studios.

Read more
Having established himself as a fine Colourist, Boswell later worked as an abstract painter. His work is held by many galleries in Britain and New Zealand, including the Tate Gallery. Boswell’s work continued to be shown after his death. Sally Hunter & Patrick Seale Fine Art gave it a solo show in 1986 and in 2004 it was included in Pax Britannica A Hellish Peace, at the Aquarium Gallery, curated by Ruth Boswell. Centennial Celebration at Square One Gallery, 2006. Lived in London.