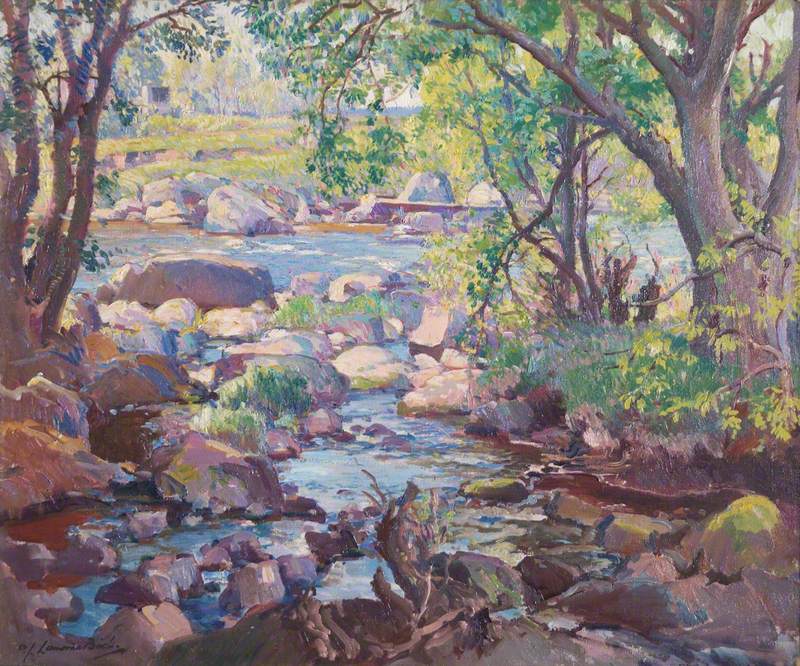 Leamington Spa Art Gallery & Museum
Landscape painter, principally of Cornwall, born in Egremont, Cheshire. Lamorna Birch’s early youth was spent working in an office and in cotton mills, sometimes designing, in Lancashire, where he painted part-time. Mainly self-taught, apart from a short period at Atelier Colarossi, Paris, in 1895. From the late 1880s he visited the Penzance region. At this time Stanhope Forbes influenced his work. Eventually settled at Lamorna, adding this to his own name to avoid confusion with the painter Lionel Birch. Exhibited prolifically at Fine Art Society, where he had one-man shows, RWS, Walker’s Galleries, RA, Walker Art Gallery, Liverpool, and elsewhere. In 1937 he painted in New Zealand. Elected RA, 1934. Tate Gallery holds his work, which found its way into many collections, and Falmouth Art Gallery gave him a retrospective in 1997, which toured to Plymouth; an exhibition at Penlee House in Penzance in 1995 had marked publication by Sansom & Company of Austin Wormleighton’s A Painter’s Laureate: Lamorna Birch and his circle.