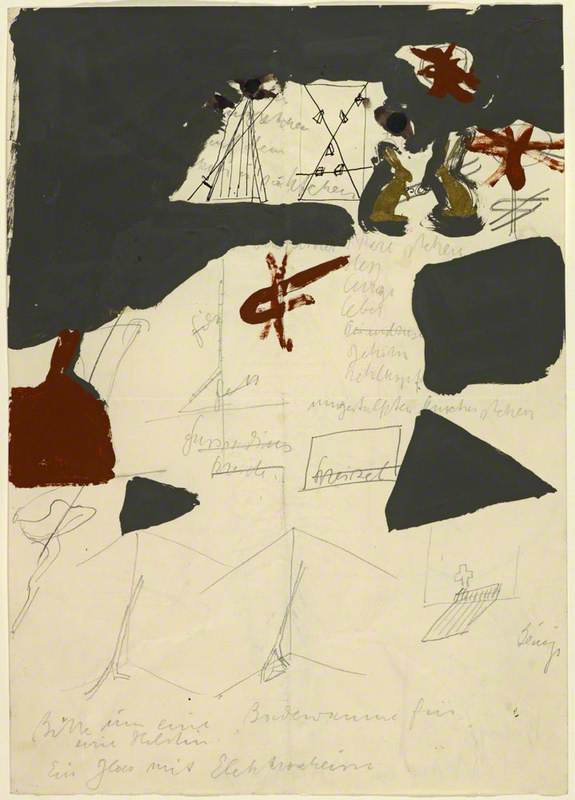 German sculptor, draughtsman, *Performance artist, and teacher, one of the leading figures in art in Europe from the 1960s to the 1980s, and central to debates about the role of the artist in the political sphere. Beuys was born in Krefeld and spent most of his early life in or near Kleve. He had intended being a paediatrician, but because of the outbreak of the Second World War he went virtually straight from school into the German air force. During his service he was wounded five times and he ended the war as a prisoner. Later in his career a story was published that after being shot down in the Crimea he was kept alive by nomadic Tartars who kept him warm with fat and felt, materials that later figured in his sculpture. The details have been contested, although the crash itself was certainly real, and the significance of the tale is in the way that Beuys used the materials of his life to produce a kind of personal mythology.

Read more
On a level of symbolic myth it stands both for personal resurrection and also the resurrection of Germany after the Nazi era, and how this is achieved, not through the ‘economic miracle’ but through a spiritual regeneration. In 1946–51 he studied at the Düsseldorf Academy. He was a student of Ewald *Mataré who, like many artists given important teaching positions in post-war Germany, had been persecuted under the Nazis. Mataré, although unsympathetic to Beuys' brooding temperament, was an important example to Beuys for his animal sculpture. However, far more significant in forming Beuys's conception of sculpture was the *Expressionist Wilhelm *Lehmbruck, whose work he had discovered when it was condemned as ‘decadent’ in the Nazi years. In the 1950s he worked as a monumental sculptor and it was in this field that in 1961 he was appointed professor at the Düsseldorf Academy, where his teaching was both controversial and charismatic. In 1962 Beuys became a member of *Fluxus. He shared its rejection of conventional art, but ultimately had a quite different conception of art, which he saw as spiritually and politically redemptive. This was embodied in his theory of ‘social sculpture’. It implies that art has a responsibility to society but goes beyond the idea of art as a kind of social service, although it might include this as one of its manifestations. Sculpture itself, with its moulding of form, is a kind of model for how society should develop. Sculpture is not primarily an issue of form, but of the forming of materials which are significant not just for their appearance, but their capacity for change—hence the interest in fat and felt for their characteristics of fluidity and warmth. The objective truth or otherwise of the Tartar story is secondary. The important point was that fat was vital to life and not associated with art. With this conception of sculpture, it is quite inappropriate to make a clear division of his work on grounds of medium. The drawing, the sculpture, the performance, the political activity, and the teaching need to be understood as a whole. In 1967 he founded the German Student Party. The following year his international fame as an artist began as a result of his exposure at *documenta 4. Beuys's sombre installation was a striking contrast to the dominance of American Pop in the exhibition. His ‘presumptuous political dilettantism’ was condemned by several of his colleagues at the academy, notably Norbert *Kricke, and in 1972 he was dismissed from his professorship because of his insistence on admitting every student who wished to attend. Beuys turned his departure from the building under the eyes of the police into an artwork. He issued a photograph of the event ironically captioned ‘democracy is happy’. The protests that followed included a strike by his students, and a settlement was eventually reached whereby he kept his title and his studio, but his teaching contract was ended. For his appearance at documenta the same year he opened an office in which he campaigned for what he called ‘direct democracy’, a system in which parliamentary party politics would be replaced by direct participation. Many of his ideas attracted hostility from the left as naive as well as from the political right. There were also admirers of his art who considered that activities such as appearing singing (very badly) in a pop video protesting against nuclear weapons did his reputation no favours. In 1982 he embarked on an ecological project to plant 7,000 oak trees. Each would be planted beside a granite block. Many can be seen to this day in Kassel, a permanent reminder of the artist who more than any other was identified with documenta. As the tree grows the granite remains. Yet the granite itself becomes over the years a site of life as lichen takes hold. It is a powerful instance of Beuys's conception of sculpture not as stasis but as change. The conventional distinction between ‘admirers’ and ‘detractors’ is inadequate for understanding Beuys's reputation. It is also necessary to make a distinction between ‘admirers’ who appreciate the aesthetic quality of his output and ‘followers’ who regard his life and work as exemplary. He is, at the very least estimate, the creator of some of the most haunting images in 20th-century art. It is quite possible to be deeply impressed by his achievements as an artist while feeling that his ambition to change society through art is wishful thinking. The concept went beyond the issue of art as a tool for political action towards a sense that the conception of art should be expanded to include it. His self-mythologizing has struck many observers as over-individualistic. What it certainly represented was a radical departure from most previous notions of political art which are based on submission to the collective. Beuys's exposure of his own wounds argued for a politics and an aesthetics which derive from the unique experience of the individual put in the service of society as a whole. Further Reading C. Kuoni (ed.), Energy Plan for Western Man: Joseph Beuys in America (1990) H. Stachelhaus, Joseph Beuys (1991)