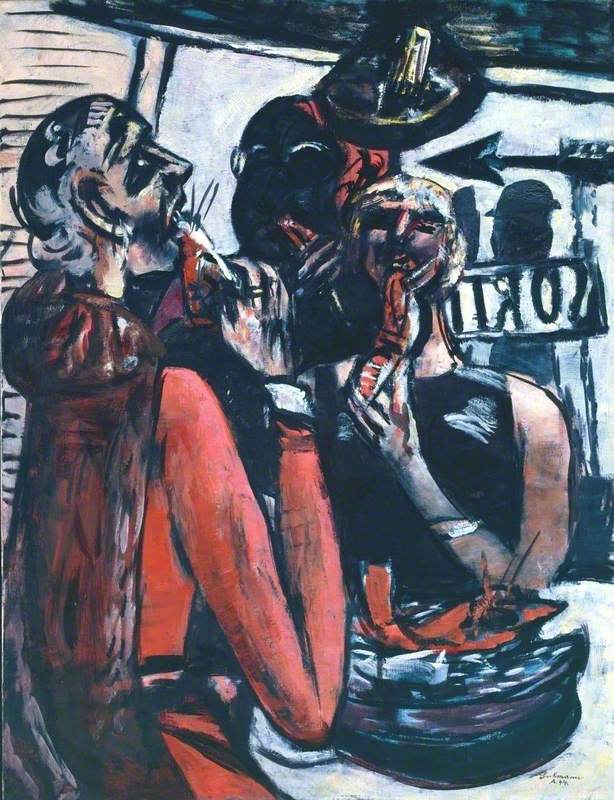 (b Leipzig, 12 Feb. 1884; d New York, 27 Dec. 1950). German painter and graphic artist, one of the most powerful and individual of Expressionist artists. Early in his career Beckmann painted in a conservative, more or less Impressionist, idiom, with which he made a good living, but his experiences as a medical orderly in the First World War completely changed his outlook and his style. Although he rarely depicted scenes from the war itself, his work became full of horrifying imagery, and his forms were expressively distorted in a manner that reflected the influence of German Gothic art. The combination of brutal realism and social criticism in his work led him to be classified for a time with artists of the Neue Sachlichkeit, but Beckmann differed from such artists as Dix and Grosz in his concern for allegory and symbolism and in his highly personal blend of the real and the visionary.

Read more
His paintings were intended as depictions of lust, sadism, cruelty, etc., rather than illustrations of specific instances of those qualities at work, and he ceased to regard painting as a purely aesthetic matter, and thought of it as an ethical necessity. In 1933 Beckmann was dismissed by the Nazis from his professorship at the Städelsches Kunstinstitut in Frankfurt; the previous year he began Departure (MoMA, New York), the first of a series of nine great triptychs painted between then and his death in which he expressed his philosophy of life and society, and his horror at man's cruelty. He moved to the Netherlands in 1937 (the year in which his work was included in the infamous Nazi exhibition of degenerate art), settling in Amsterdam until 1947. The last three years of his life were spent in the USA, where he taught in Washington and New York. Beckmann's philosophical outlook, which he expressed in My Theory of Painting (a lecture delivered in London in 1937 and published in 1941), is somewhat incoherent, but his work forms one of the most potent artistic commentaries on the disorientation of the modern world. Apart from his allegorical figure compositions, Beckmann is best known for his portraits, particularly his self-portraits, in which he charted his spiritual experiences. He was also a prolific draughtsman and printmaker (mainly of etchings and drypoints).