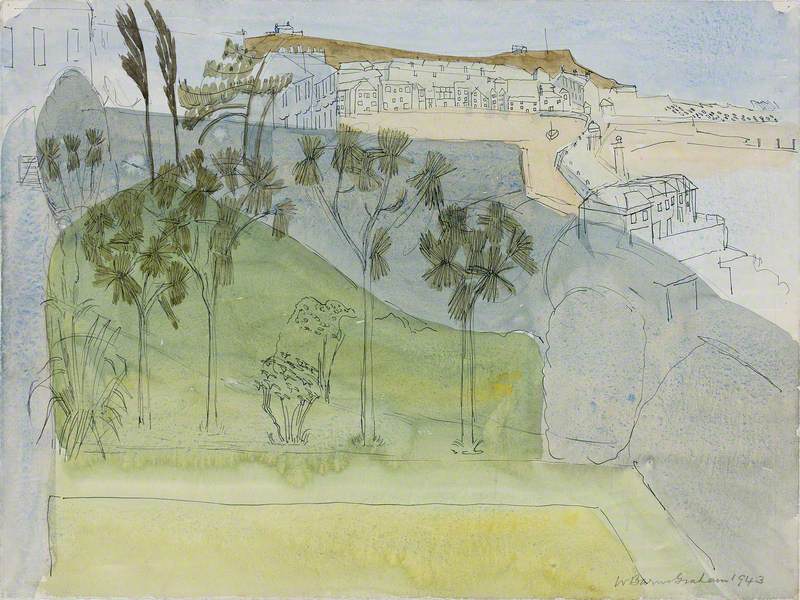 © by courtesy of the Barns-Graham Charitable Trust. Photo credit: The Ingram Collection of Modern British and Contemporary Art

Painter and teacher, born in St Andrews, Fife. She attended Edinburgh College of Art, 1932–7, having a studio in the Scottish capital, 1936–40. William Gillies and David Foggie were important teachers. On her quizzing Foggie as to whether or not she would ever be any good as an artist, he replied gruffly: “Come and see me in 20 years and tell me if you’re still painting.” In 1940 Barns-Graham pursued an Andrew Grant post-graduate travelling scholarship and went to live in St Ives, Cornwall, which with St Andrews remained her base. There she joined the Newlyn Society of Artists, the St Ives Society of Artists and became a founder-member of the Penwith Society in 1949. She had known Margaret Mellis in Edinburgh and now became friends with Ben Nicholson, Barbara Hepworth and Naum Gabo.

Read more
A key influence was a visit to Switzerland in 1948, where she fell in love with glaciers as a subject, their transparency combined with their roughness. Took up an Italian Government Travelling Scholarship in 1955 which produced another impressive body of work emphasising her incisive draughtsmanship. Taught at Leeds School of Art, 1956–7, then from 1961–3 had studio in London before returning to St Ives. At an early age she had drawn abstracts in coloured chalks, diverse aspects of geometrical and gestural abstraction and landscape were to be explored through constantly inventive career of Barns-Graham, known widely as Willie. She exhibited at Downing’s Bookshop, St Ives, in a solo show in 1947 and 1949 and showed steadily after that, selected venues being Roland, Browse and Delbanco; Richard Demarco Gallery, Edinburgh; New Art Centre; and Pier Arts Centre, Stromness. Tate Gallery held three survey exhibitions, in 1977, 1985 and 1986; there were major retrospective shows at Newlyn Art Gallery, 1989–90 and William Jackson Gallery, 1992–3, both touring; in 1999 Tate Gallery St Ives put on an important themed exhibition; and in 2002–3 Crawford Arts Centre, St Andrews, toured the show Painting as Celebration. Art First held a tribute show in 2004, Tate St Ives another covering her life and work, 2005, and Art First in 2006 Important Works from Her Career, selected from The Barns-Graham Charitable Trust. Arts Council and Scottish National Gallery of Modern Art hold her work. In 1949, Barns-Graham married the writer and critic David Lewis, with Peter Lanyon as best man. She and Lewis had an amicable divorce in 1963 and he subsequently moved to America.

Wilhelmina Barns-Graham attended the Edinburgh College of Art (1931–1939). In 1940 she moved to St Ives, where she rented no. 3 Porthmeor Studios until 1946 and joined the NSA and the STISA – leaving the latter in 1949 to become a founding member of the Penwith Society of Arts.

After the war, she travelled regularly in Europe and taught at Leeds School of Art in the mid-1950s. In 1952, she held her first solo exhibition at the Redfern Gallery.

Although she spoke of feeling sidelined by the increasingly discordant community in St Ives, Barns-Graham was considered a pioneer of post-war British abstraction and exhibited numerously, at the RA, WIAC, Tom Caldwell Gallery, Marjorie Parr Gallery and the RSA. In 1985, she was given a retrospective exhibition at Tate St Ives and was appointed CBE in 2001.