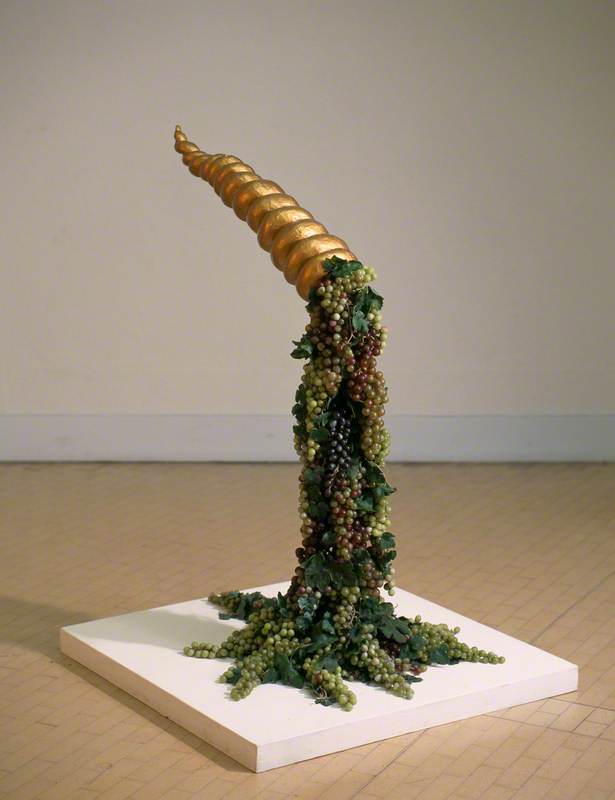 British sculptor, draughtsman, and writer, born in Troutbeck Bridge, Westmorland. He studied at Lancaster College of Art and the Central School of Art, London. He arrived at art school with the intention of studying ceramics and with a fascination with Greek art and philosophy. This interest is apparent in his sculpture: it draws on classical statuary and architecture as a source. These subjects are presented in brilliant synthetic colours or as repeated motifs. We are reminded that the origin of standardized production lies, not in the Industrial Revolution, but in the sanctified classical orders of architecture. Drawings, reminiscent in their thick, curved outlines of the late work of Giorgio *de Chirico, show relics stranded in expansive interiors like deserted museums.

Read more
In one sculpture a gilded ornate tripod supports a pile of excrement. Elsewhere there is an unlikely link between classical imagery and a certain *Pop sensibility, as in Fruit of Oblivion (1982, Leeds City Museum and Art Gallery), in which a gaudily coloured cornucopia of grapes appears to be pouring out of a golden horn but actually supports it. In the 1980s works such as this were related by critics to the classical revival of such painters as Stephen *McKenna, but Allington does not appear to share the same faith in the idea of the language of classicism as a living form of communication. He has more in common with the object sculptors such as Tony *Cragg who are his contemporaries. As Michael Newman puts it, ‘the debasement of the classical ideal in the tourist souvenirs of the “plastic Parthenon” undermined the foundation of classicism by suggesting that it too was a form of tourist nostalgia’. Allington has described sculpture as ‘looking at real things by making real things’ and ‘making poetry with solid objects’ (‘A Method for Sorting Cows’, 1997, in J. Wood, D. Hulks, and A. Potts, Modern Sculpture Reader, 2007). Further Reading M. Newman, ‘Edward Allington’, in Grenier (1988)