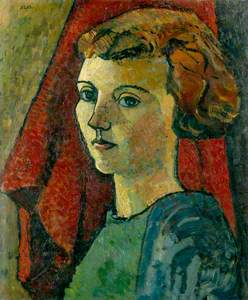 British painter, born in Buenos Aires, the daughter of a British businessman who made a fortune there. She moved to England as a child and studied with Leon Underwood, 1924, at the Slade School, 1925–6, and in Paris, 1928–30. During the 1930s she became one of the leading British exponents of Surrealism, taking part in several of the major international exhibitions of the movement (although she was never much concerned with its polemical side).
Read more
As well as paintings she made mixed-media objects such as Angel of Anarchy, an imaginary portrait of Herbert Read (1940, Tate). In the 1940s and 1950s she changed direction, painting cool Tachiste abstracts, although her work still retained Surrealist elements.
She published an autobiography, A Look at My Life, in 1988; the book is full of famous names, for she knew many eminent artists and writers. It concludes with the words: ‘I hope to die in a sparkling moment.’