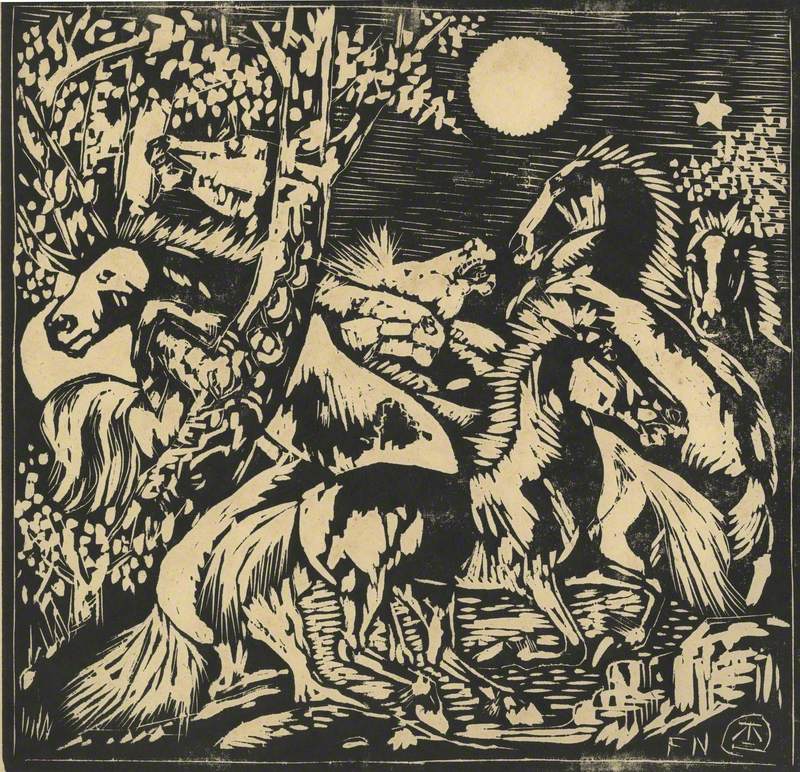 A printmaking technique of printing in relief from a wooden block usually made from the plank of a fairly soft wood. The artist draws the design either directly onto the block or onto a sheet of paper which is then glued onto the block. A specialist is usually employed to cut away, with gouges and chisels, the wood at the sides of the lines the artist has drawn. The block is then inked and printed from, using either a printing press or hand pressure.

Read more
Printing from woodblocks was invented in China but did not reach the West until the 13th century when it was at first used for printing designs onto textiles. The earliest woodcuts on paper date from the late 14th century and the technique soon became widely used for the production of relatively crude playing cards and religious imagery. Only in the late 15th century was it taken up by artists of the first rank such as Albrecht Dürer in Nuremberg, stimulated by the need for illustrations for printed books: type and woodblock could be printed in combination from the same press. Dürer's own great series of the Apocalypse (1499) and the Great Passion and Life of the Virgin (1511) originally had facing texts. The technique spread to other Germanic centres, but by the mid-16th century its popularity began to decline. The Netherlands, France (Paris and Lyons), and Italy (Florence and Venice) also had significant woodcut traditions. After 1600 there were sporadic revivals of the woodcut in the Netherlands (Jegher's woodcuts after Rubens) and in England (Hogarth's Four Stages of Cruelty), but it was only seriously taken up again in the late 19th century by artists such as Gauguin and Munch. In the early 20th century it was the favoured printmaking technique of the Dresden-based group of Expressionists, Die Brücke.